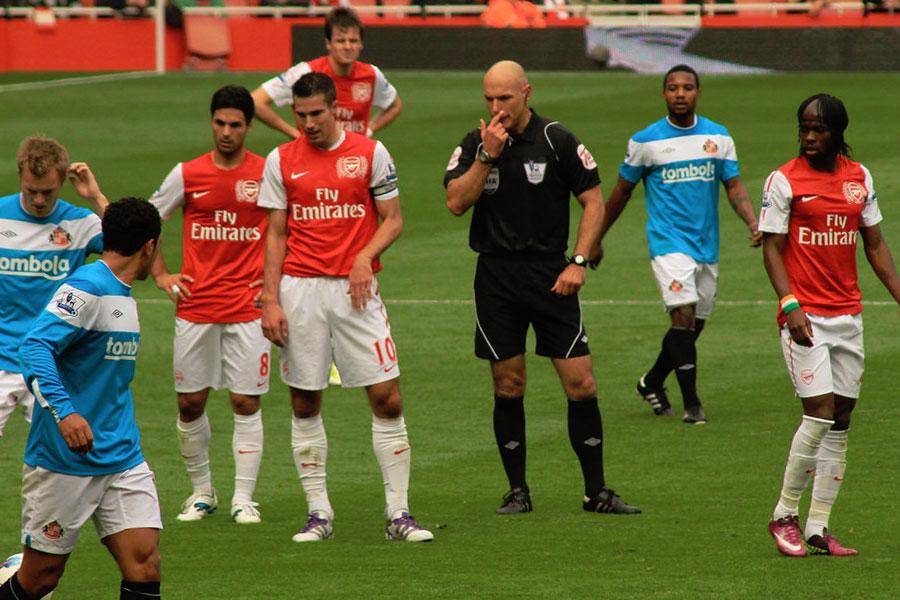 I know that’s not a song - rather, we can sing about “the b*stard in the black” or claim “the referee’s a w*nker” - but some recent procrastination resulted in discovering that the footballer Juan Carlos Pérez López - known as “Juankar” - has actually turned out in an all-black kit for Málaga in 2018-19. When I realised that wondrous fact, I was quick to poetically announce it to the brilliant Martin Le Roy, who, to his credit, chose sparing my blushes and feigning being impressed at my find over correcting my embarrassing error.

Generally, I’m not one to defend football referees against accusations of being b*stards or w*nkers. Their arrogance and self-importance has been a scourge on the game for decades, especially some of the most successful ones. Their abuse of their power has led to far too many miscarriages of justice in pivotal games, and aside from a temporary demotion to lower level matches, their crimes go unpunished.

I’ll show my working, of course.

Take Exhibit A: In the 2010 World Cup Final, being played between the roughhousing Dutch and the tiki-taka-ing (Boring Edition) Spanish, the Netherlands’ midfield enforcer, Nigel de Jong, landed a karate kick into the chest of his classy antithesis, Spain’s Xabi Alonso. Now, I do hope one day someone with modest football history knowledge reads that sentence and assumes I’m exaggerating, as surely if that’d’ve happened on such a big stage they’d’ve heard about it, and goes to check it on YouTube, only to find I was right. If that someone is you, please get in touch.

The reason that someone might not have been aware of the karate kick is due to referee (shudder) and former South Yorkshire Police sergeant (convulsions) Howard Webb deciding that De Jong should only receive a yellow card and not a red, despite replays suggesting that even if Webb’s view of the initial impact was obscured, the contact between studs and trunk painfully endured until both players tumbled to the ground in full sight. Webb claims sending off De Jong never entered his head, so the potential implications of the correct decision so early in such a huge match didn’t trouble him to the point of him bottling it. Webb claims.

Next up, last year, former Premier League referee Mark Halsey admitted booking a player, in 2011, who had asked him to, because he had a big derby game coming up in the game after next, and wanted to serve his looming suspension the match before. This is a mix of dodgy and stupid, as what he advised the player - the identity of whom I’m pretty sure of, and he’s a sh*tbag - to do to facilitate the caution was both obvious and should have resulted in a booking anyway, so the whole controversy - seven years later - could have been avoided. But collusion to arrange an occurrence which, at the very least, is subject to betting markets could be regarded as, at the very least, spot-fixing. Not okay.

There’s plenty of this, like when referees blow up early at the end of games to put teams out of their misery when a goal in stoppage time could win someone a lot of money. Directing the fourth official to signal a minimum two minutes of additional time because a team’s winning 4-0, despite there being five substitutions and a stretcher injury in the second half? And then ignoring any stoppages inside that nominally additional time, as well as the fact that it’s a minimum, so blowing the whistle on 120 seconds exactly? Nuh-uh.

But, back to cards, and it’s not just the spread-betting market that’s affected. Mark Clattenburg, who seemed to be hugely regarded amongst the Premier League, Uefa and Fifa, admitted in an interview in 2017 that he should have dished out three red cards to Tottenham Hotspur in the infamous Battle of Stamford Bridge which handed the Premier League title to Leicester City in 2016. He very openly stated that he didn’t want to blamed for Spurs not becoming champions, so instead let their Spursiness do it instead - “My gameplan was: let them lose the title” - bypassing the rules as he saw them to do it.

Gamblers, do you like this man? I haven’t checked the order of events, but perhaps a Spurs player being sent off when they were 2-0 or 2-1 up would have led to them shutting up shop and going on to win. Clattenburg seemingly has no qualms about letting us know he didn’t play it by the book, and we’ll never know how things would have turned out had he done.

I’ve defended referees before, and bemoaned the erosion of their power brought about by technology, but when their abject personalities can impact upon such a popular sport to such an extent, bring on the robots. AI is surely preferable to CI (Clattenburg Intelligence), and currently we have a mishmash of referees’ arrogance and a team assisting or undermining with replay screens. The most frustrating occasions are when the referee checks VAR but still gets the decision wrong, in the case of Spurs’ recent winning away goal in the Champions League tie with Manchester City. It took long enough to check, so would it have been so bad to check one more angle in order to see the handball and get the decision right?

The technology is here now. AI - should football endure - will eventually take over in real time entirely, so that the personality of the referee and the subsequent inconsistency can be eradicated. Referees, and indeed linesmen - see the horrendous pre-VAR application of the offside law - who ignore the rules, and arrogantly abuse their power instead of ensuring correct decisions are made, are as naive as the shop cashiers directing us to use self-service tills. Eventually technology will be the death of you, and you’re handing it the gun.

There are no comments posted here yet